NOTE: this is a draft/todo article of a topic that has been implemented. It is kept around for historical purposes. You probably want http://bugs.quassel-irc.org/projects/quassel-irc/wiki/Blowfish_Encryption_Manual instead.

Blowfish is a keyed, symmetric block cipher, designed in 1993 by Bruce Schneier and included in a large number of cipher suites and encryption products. Blowfish provides a good encryption rate in software and no effective cryptanalysis of it has been found to date. However, the Advanced Encryption Standard now receives more attention. Schneier designed Blowfish as a general-purpose algorithm, intended as a replacement for the aging DES and free of the problems and constraints associated with other algorithms. At the time Blowfish was released, many other designs were proprietary, encumbered by patents or were commercial/government secrets. Schneier has stated that, "Blowfish is unpatented, and will remain so in all countries. The algorithm is hereby placed in the public domain, and can be freely used by anyone."[1]

Blowfish can be used in IRC to encrypt messages between 2 persons in a query or messages in a channel and the topic too.

The current development state can be found at http://gitorious.org/~johu/quassel/johus-quassel

The Blowfish algorithm is implemented in the QCA (Qt Cryptographic Architecture)[7] library. QCA works on all plattforms there are supported by QT including Unix, Windows and MacOSX. It is already included in Quassel build system at listed repository above. At runtime a QCA provider plugin is needed, for example qca-ossl.

a) setting a key for a user or channel

b) deleting a key for a user or channel

c) show key for a user or channel

After short discussion in #quassel.de with Sput, krytzz and brot Blowfish encryption will be included in core. See section discussion below for more information. The only contra argument is the unsecure path between remote core and clientvin a untrusted net in case of no ssl connection is present. But the pro argument preponderate to strong. So i will revert the first plan to implement the de-/encryption in client.

The other result of this discussion is this wiki article.

There are two possible ways to implement Blowfish support in Quassel architecture: 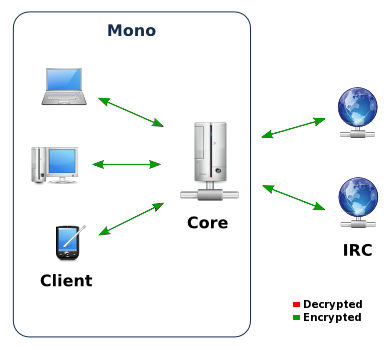 All messages will be de-/encrypted on client side.

b) Core side de- and encryption 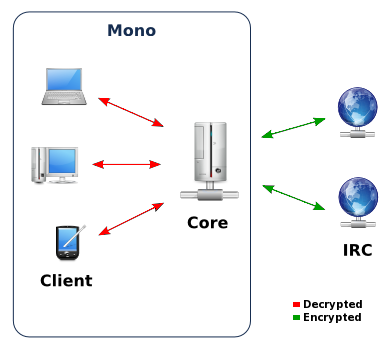 All messages will be de-/encrypted on core.